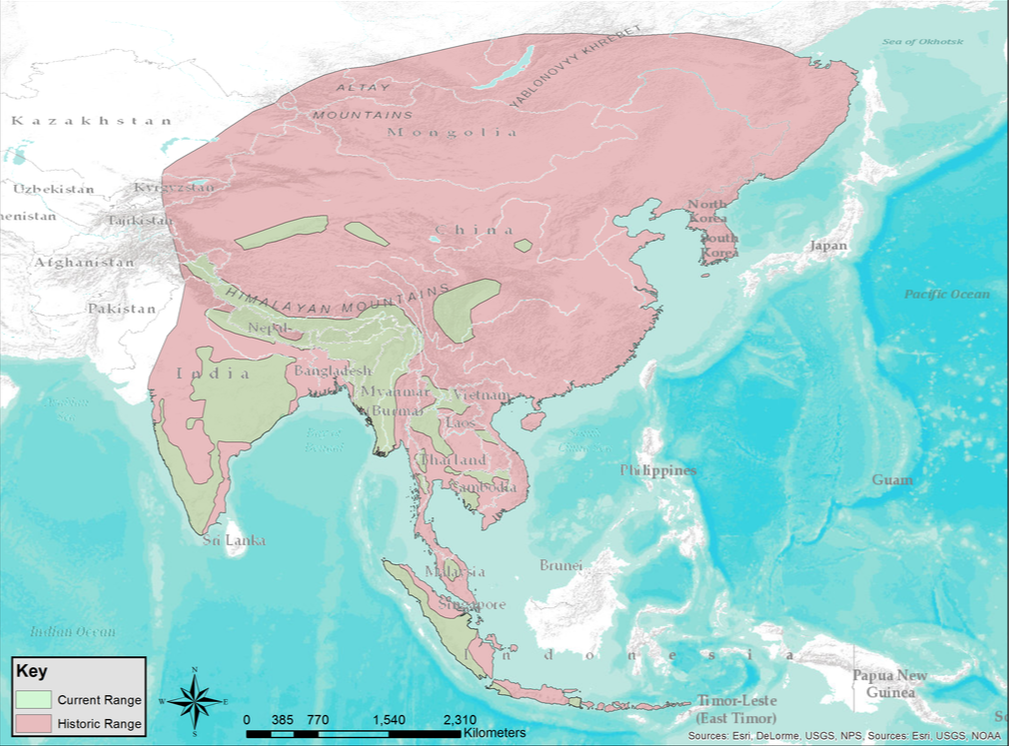 Dholes have a large geographical range that stretches north to Siberia, west to India, down south to the islands of Java and Sumatra and to China to the east (Johnsingh 1985). Even with their large range, they have disappeared from 75% of their historical range (IUCN 2015). Currently, the last stronghold for dholes is the forest of south and central India (Johnsingh 1985); the rest of the populations is severely fragmented (IUCN 2015).

What is a habitat exactly? A habitat often refers to an area that meets an animal’s basic life requirements like food, water, shelter and space (Giles 1978). For dholes, it is almost any habitat that can sustain its prey. They can live in primary, secondary, and degraded forms of tropical dry and moist deciduous forest. They have been seen in teak plantations, evergreen and semi-evergreen forest, and bare alpine steeps (Khatiwada 2011, Acharya 2007, Johnsingh 1995). Really, the only habitat that dholes do not seem to utilize are deserts. Dholes might be habitat generalist to avoid competing with predators (Johnsingh 1995). The main things dholes need from their habitat are an abundance of prey, an available water source both for drinking but also hunting, patches of forest with grassy openings, potential den sites and low to no human impact (Johnsingh 1985).

Territory Size and Use

​Dhole home range or territory has been measured in a few different studies. Overall, it appears that dholes need smaller home ranges than other pack-hunting canids like wolves and African wild dogs, mainly due to the large concentration of sedentary prey (Johnsingh 1982). In Pench Tiger Reserve in India, dholes had a home range of 77.58 (+26.6) square kilometers with a daily walking range of just .01 to 10.84 kilometers. This was calculated from three collard dholes in the park from three different packs (Acharya 2007). They were also able to figure out the density of dholes in the park to be .1-.3 dholes per square kilometer. This was most likely due to the high prey density, but also due to the high quality of the habitat within the reserve. Interestingly, the dholes’ home range shrinks during denning and nursing of pups to about a quarter of the normal range for denning and about half the size during nursing time. This change in range size still occurs when no pups are born or survive. This could mean the change in range is due to an environmental factor or seasonal change in resources (Acharya 2007). Home range size varies from habitat type; it can range from 23 to 200 square kilometers (Johnsingh 1982, Venkatraman 1995). Dholes will hold a smaller internal home core area, which will be where dholes spend the majority of their time and activity (Acharya 2007).