What Makes a  Dhole

“The dhole is one of the least studied social carnivores in the world. Even in many of the well-protected reserves, up to date scientific information on existing dhole populations remain negligible. It is in most vital that a conservation strategy be evolved by collecting information of the biological and ecological requirements of dholes, and to identify the threats to the species at various levels. There is therefore an urgent need for in-depth, scientific research on dholes.” (Acharya 2007)

​Written as the introduction for what would become a very well-rounded thesis on dholes in India, truer words on the dhole have not been written. Since 2007, there have been some changes with India, Thailand, Nepal and even China starting projects to study their dholes. Most dhole research is done as a larger assessment or survey often focusing on tigers or snow leopards.

What's in a name

​What does the name mean? The term dholes is reported to have an ancient Asiatic origin; it’s thought to mean “reckless” or “daring” (Mivart 1890). The scientific name Cuon alpinus breaks down to Cuon in Greek meaning “dog” and alpinus meaning “mountainous,” so its name is literally mountain dog, which made sense when dholes were placed in the canid family. They also have many other names: a total of 64 native names in 38 languages. Having so many names in so many different languages and dialects shows how widespread dholes once ranged. That doesn’t even count for the countless other names for wild canines in some of these areas; however, these names were used interchangeably with wolves and jackals.

History of the dhole as a canine

Dholes are considered to be one of the oldest of the Canidea family, the split between Canis (true dogs, like wolves and coyotes) and Cuon happened about 5.2 -7.6 million years ago (Zhang and Cheng 2010). This early split from true dogs could help explain many of the physical difference between dholes and other canines. For one would be its teeth and jaw. Unlike other canids, dholes are short one molar on the top and the bottom of the jaw; most canines have a dentition of 3/3-1/1-4/4-3/3 (Cohen 1978) standing for incisors, canines, pre-molars and molars. Most canids have a fourth molar that the dhole lacks. It’s also noted that the lower carnassial M1, or the front molar, only has one cusp to it or one crest compared to the double crest seen in other canines (Cohen 1978). Another adaption that dholes have that separate them from other canines is the number of mammories or teats the female dhole has. Most canids average five pairs along the abdomen. For dholes, it can be between 6 and 7 (Sillero-Zubiri et al. 2004).
​
These traits are thought to have evolved in dholes to support their hyper-carnivorous lifestyle. The streamlining of the teeth allow for dholes to be able to shear meat easier from prey, which allows them to eat it faster; this dentation change does limit them to a pure flesh diet unlike other canids with an omnivorous diet (Van Valkenburgh 1991). Other traits of a hyper-carnivore would be large pack size, large being more than 10 animals and a minimum successful pack size. For dholes, this has been seen at 7 pack members (Johnsingh 1982). The other direct requirement would be large litters, again larger than 10 pups, which would explain why the dhole has 12 to 14 mammea (Nowak 1999). These large packs and large litters in turn require the pack to have a large area of land; however, it might surprise you to know that dholes don’t need as large of a territory as you might think.
Other physical attributes that set the dhole apart from other canids would be its shorter muzzle and larger jaw muscles, more like the African wild dog and less like the wolf like the clad of canids (Acharya 2007). 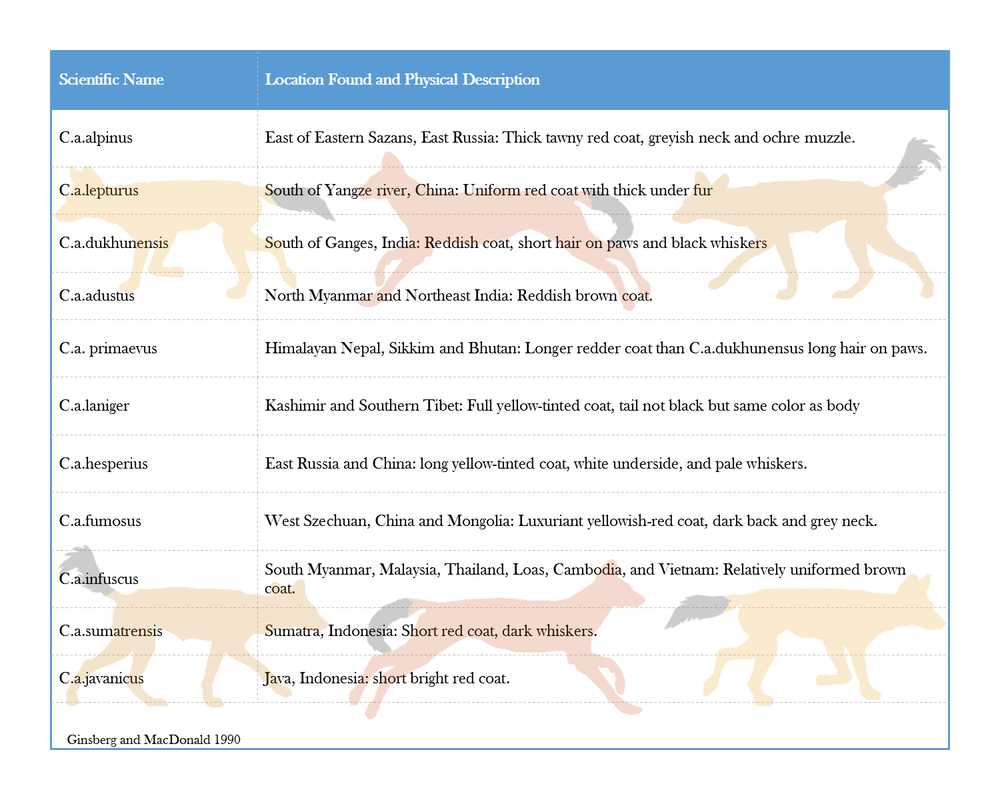 ​The legitimacy of these subspecies is in question. When first put as it was on clad in 1890, Miyart split the dhole into two species: the northern dhole, Cuon alpinus, and the southern dhole, Cuon javanicus. He did this based on the difference in body size with the southern being slightly smaller, but some was based on the morphology of their teeth. They later were merged into one species, Cuon alpinus (Ellerman and Morrison-Scott 1966). The javanicus is now used to for the Java subspecies. Today there is debate on if there are eleven subspecies like Ginsberg and MacDonald or two subspecies on the main land and one for the populations on Sumatra and Java. One research project examined genetic material from living dholes along with samples from known museum collections; this allowed for representation of areas where dholes no longer occupy. The examination of these materials showed two major phylogeographical groups, although the authors would not call them subspecies as there was no clear distinctions. They also found that the genetic diversity was highest in Southern India (Iyengar 2005). It appears that dholes were isolated on Sumatra and Java 10,000 years ago (Meijaard 2003). This would support the idea that dholes were isolated during a glaciation event. When the glaciers retreated, it allowed the mainland group to mingle but it isolated the two island populations. This would amount for the low level of genetic diversity in Java (Iyengar 2005).
It has been suggested that the eleven subspecies be condensed into just two subspecies: a northern variety and a southern variety. The northern dholes would include the following current subspecies: Cuon alpinus: alpinus, primaevus, laniger, hesperius and fumosus. The southern dholes would include the following: Cuon alpinus: lepturus, dukhumensis, adjustus, infuscus, sumatrensis, and javanicus (Durbin 2004). Whatever happens with the taxonomy of the dhole, it will be important to stay up on it as it could have a major impact on conservation efforts and strategies. ​

​Dholes can live up to 16 years in captivity with the average being 10 to 12 years. Out in the wild, older dholes often aren’t seen again when they are around 7 to 8 years of age (Venkataraman 1998).